Turning the Tables: Policy and politics in an age of ageing

Everywhere we look, society’s crisscrossing political cleavages are deepening. Growing inequality threatens to open old wounds between the haves and have-nots, breakneck-paced globalisation between the forces of open and closed. Instead of easing understanding and compromise, the competing personal convictions within society seem to increasingly corral people into exclusive, crystallised interest groups. Deep enough, those cleavages can sever societal unity, carefully cultivated throughout Europe and the West since World War II, at the roots.

Nowhere was this new reality in starker relief than in the United Kingdom following the popular decision to leave the European Union. Despite tight polling leading up to the June 23rd plebiscite, the Leave campaign’s victory was ultimately a surprise. The palpable and widespread sense of disbelief suggested that the cleavages running through British society were much more present and deep than previously acknowledged. Explanations abound. Sympathisers of the decidedly populist campaign inside Britain and elsewhere cite uncontrolled immigration, profit-before-all capitalism, the erosion of popular sovereignty, and the failure of political elites to see beyond their own immediate interests. More measured analysts, looking further up the causal stream, point to the concentrated costs of trade and digitalisation.

As it happens, the June referendum forced another factor stage front: demography. Or, more precisely, age. The stark difference between how young and old Britons voted was almost shocking. About 65% of those over the age of 65 voted to support the campaign to leave the EU. About 70% of those 18 to 24 had voted to stay, with the intervening age groups voting along the same gradient. The division between the young and old was so marked that it left many with a feeling of one demographic group imposing its will on another and, consequently, questioning whether a winner-take-all-forever referendum was appropriate—especially when it is the young who live with the consequences the longest.

We argue the real story is that the young lost at all. With a traditional age structure, the young have no trouble pushing their preferences with 70% consensus. In the UK’s ageing society, the young are simply at an increasing numerical disadvantage. In June, there were about 5.3 million voters aged 18 to 24. There were over 11 million over the age of 65.

Admittedly, the effects of population ageing are complex. Ageing does not automatically leave one disposed to sympathising with populist messages. Yet, age can significantly affect policy preferences. Studies looking at Germany and other European countries have shown that older voters are less likely to support public money for young families. In Switzerland, age seems to be the most relevant factor in decisions on redistribution policies.

Meanwhile, incumbent policymakers, in a predictable effort to reduce complexity, have only reluctantly recognised age as a possible new cleavage. In her 2008 government policy declaration, German Chancellor Angela Merkel argued that the specific interests of each generation must be considered pari passu. Six years later, a 2014 government report stemming from Germany’s national demographic strategy “Every Age Counts” highlighted the need to reconcile their often diverging interests. Concrete ideas for how to do that are still missing.

Politically, the numbers suggest indeed that ignoring age may no longer be an option, and not just in Germany.

An index of generational power

The UK’s recent experience is a powerful example of how population ageing is changing electorates, and, to date, it is probably a unique one. We wanted to know, could “Brexit” happen elsewhere?

Brexit—by which we mean the mathematic defeat of young people’s preferences due to their simple numerical disadvantage—will obviously not imply exit from the EU anywhere else. Generationally-defined questions are posed in a different way in each country, and outcomes will be unpredictable. But what if a political question generated a generational split in other countries like the one exposed by the UK’s referendum? How would the cookie crumble?

To answer this very question, we began work on a Generational Power Index, which is based on a simulation taking the percentage at which each age group voted Yes or No (“Leave” or “Remain”) in the Brexit referendum. There, the majority of people under 45 voted “Remain”, with shares being as high as 70% among 18- to 24-year-olds, while those over 45 predominantly voted “Leave”. Assuming 100% voter turnout, we applied a slightly more schematic version of this voting pattern to other countries’ voting-age populations in 2015, estimated by those in each country that have citizenship.

To simplify the results and make them more comparable, we have taken the difference between the Yes votes (the option supported by most older voters) and the No votes (the option supported by most of the young) and divided that difference by the total voting-age population. The result is the difference between the total number of Yes and No votes as a share of the electorate. To get a clean number, we multiply it by 100. Ultimately, a positive score means Yes wins. A negative score means No has it.

As the blue bars of Figure 1 show, there are no negative scores among the 19 countries included in the index. This means in none of these countries could the young push their preferences at the urns, even in the extraordinarily favourable conditions that an equal-turnout scenario implies for them. 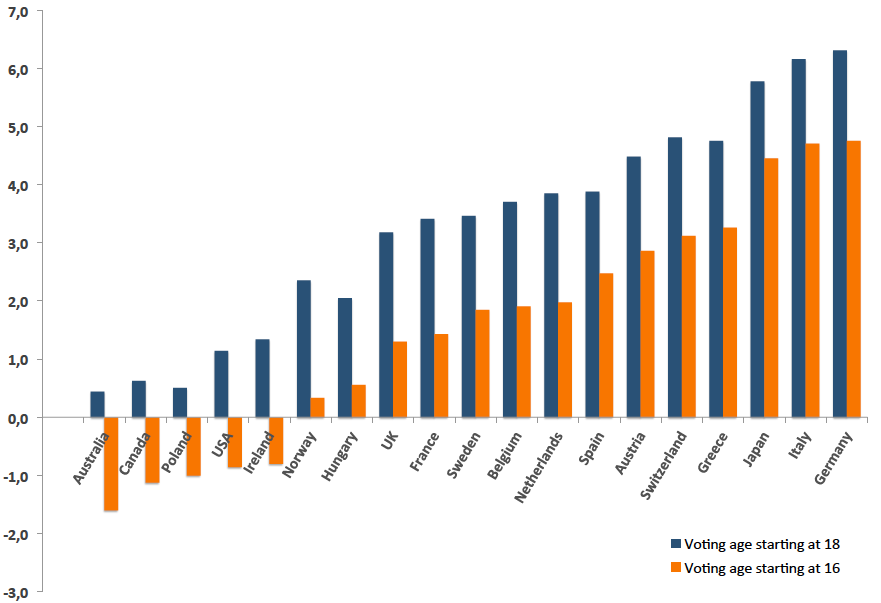 Source: Authors’ own calculations based on data for the year 2015  from Eurostat and the Statistical Offices of Australia, Canada, Japan, and the US.

Leading up to the Brexit referendum, there was some debate on whether 16-year-olds should be allowed to participate. On the one hand, they are the people who will have to live with the consequences of such a permanent decision the longest. They were also allowed to vote in the Scottish referendum just 21 months earlier. On the other, they are particularly susceptible to emotional, identity-related appeals, if other instances are any guide.

That debate heated up on June 24th, when the question of whether to stay in the EU was shown to be more generationally-defined than foreseen.

Incorporating 16- and 17-year-olds into the Index (orange bars) is useful for a couple of reasons. In the UK, polls indicate that they would have voted similarly to the 18- to 24-year-olds, if not even more in favour of Remain. Including them is therefore an illustrative exercise in hindsight. More importantly, however, it shows how small this group actually is in some countries. They manage to tip the balance in Australia, Canada, Poland, Ireland, and the U.S., but in the other 14 countries the overall picture remained unchanged, showing even more clearly the extent to which many rich countries’ populations are ageing.

Even without 16- and 17-year-olds, there are important differences between countries, though. Germany, Italy and Japan stick out as the countries in which the demographic power of the older age groups is the strongest. In Australia, Canada, and Poland, where excess votes make up less than 1% of the electorate, younger and older voters nearly strike a demographic balance. Poland’s position might come as a surprise. Like many of its former Eastern-bloc counterparts, Poland experienced a sharp decline in fertility following the collapse of communism, and today has one of the lowest fertility rates in the world. However, when we look more closely at the country’s population pyramid, we see it swells in the “middle”, where voting preferences were not as cohesive as among the very young in our model, but were nevertheless consistent with them.

The selection of countries shows the diversity of ageing populations. In some countries—such as Germany, Italy, and Japan—populations began ageing several decades ago. In others, higher fertility has slowed and delayed it. Since the end of the Franco regime, Spain has aged rapidly, whereas Sweden’s population composition is profiting from relatively high fertility. Europe is heavily represented among the world’s oldest countries, but Japan makes a strong showing for Asia. And we know that, in an extraordinary twist of history, China will be joining their eastern neighbour soon.

Political strategies for responding to an ageing electorate must be correspondingly diverse. In some countries, pension reforms needed to guarantee the long-term sustainability of social security systems will necessarily be urgent. In others, less so. If David Cameron was serious about keeping the UK in the EU, he might have been well-advised to focus his campaign on alleviating the concerns of older voters.

That said, it will be important that policymakers and political actors resist the allure of lazy ageism. The elderly are far from homogenous. They are a diverse group of people with varied backgrounds. Would you be surprised to find that older people with children and grandchildren were considerably more likely to support public transfers for families with young children? Population ageing is deepening an existing political cleavage, not replacing the rest of them.

Policymaking in liberal democracies has always been about bargaining. A very basic example is food. What security farmers lose in market protections, consumers gain in less expensive food. But what both pay for food safety and labelling rules, they both gain in health and a well-functioning market. Determining the optimal food safety, labelling and market protection arrangement requires negotiation between two groups whose interests align as often as they clash. Similarly, the political cleavages deepened by population ageing must be carefully and constantly managed.

An interesting experiment was carried out in Germany just this year. Following on its success in 2013, the “Parliament of Generations”, organised by the Academy for Political Education in Tutzing, brought together ordinary citizens of all ages to take on the role of political decision-makers for two days. The participants were divided up into “parties” corresponding to their age group. They then had to negotiate policies for an ageing society. Not only was the Parliament of Generations a good exercise for showing how complex reaching political solutions can be, it also provided a forum in which the young and old were confronted by the ideas, expectations and concerns of their counterparts, which in many ways have diverged.

Ultimately, it is this kind of awareness and understanding of where cleavages split us down the middle (“I am a pensioner, I am a grandparent”), that gives lawmakers with elections to win the cover they need to adopt responsible, long-term solutions to today’s societal challenges.