Female-Breadwinner Families on the Breadline

A new study by Kowalewska and Vitali (2020) suggests it is time for policies to recognise the economic fragility of female-breadwinner couples.

Work-family arrangements and the growth of female-breadwinner couples

The gendered division of paid and unpaid work within couples has transformed across industrialised countries in recent decades. In analysing this change, policymakers and academics have endorsed the ‘social investment’ agenda, promoting a shift from male-breadwinning to ‘dual-breadwinning’ among partners (e.g. Esping-Andersen, 1999; Gornick and Meyers, 2009).

This emphasis on dual-earning has meant contemporary studies of work-family arrangements and policies have too often assumed men in couple-households are employed full-time. However, this overlooks an additional ‘type’ of household employment, which is the ‘female-breadwinner’ arrangement. Under this arrangement, the woman is the sole or main wage-earner. This arrangement has become more commonplace since the 1970s across European countries, North America and Australia (Figure 1). 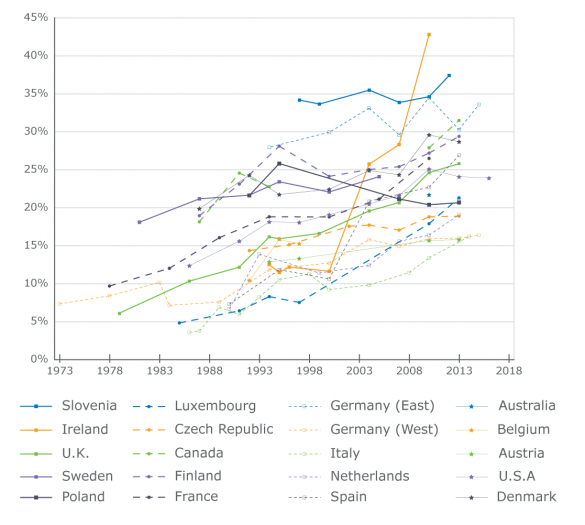 Female-breadwinner couples are the most economically vulnerable

Female breadwinners have featured widely in the media and popular press. They are often stereotyped as career-oriented, highly-educated, high-earning women. A new study by Kowalewska and Vitali (2020), however, shows that female-breadwinner couples are typically economically disadvantaged, especially when the woman is the only wage-earner.

Despite studies of work-family arrangements taking female-breadwinner families into consideration, typically due to small sample sizes, they tend to not distinguish between ‘pure’ female breadwinners, in which the woman is the sole wage-earner and her partner is inactive or unemployed, and couples in which the woman is the main wage-earner but her partner still works. The two types of couples, though, have different socio-economic characteristics and should always be considered separately.

‘Pure’ female-breadwinner couples have a lower disposable household income compared to all other couple types. They also earn less than their ‘pure’ male-breadwinning counterparts, even when they work the same number of hours and in the same type of occupation. The earning differences between male and female breadwinners are linked to persisting gender pay gaps and motherhood penalties. They also reflect that female breadwinners are potentially ‘emergency’ breadwinners, who become the sole wage earner out of economic necessity rather than through deliberate choice. Most men in female-breadwinner couples are in fact unemployed. This corresponds with prior research showing a rise in female-breadwinning as a by-product of male unemployment (Vitali and Arpino, 2016) and an ‘added worker effect’, whereby women ‘compensate’ for a male partner’s job loss by taking up employment or increasing their hours (Bredtmann, Otten and Rulff, 2018). Especially during economic crises, this is true since male-dominated job sectors such as manufacturing, construction and finance are affected more than female-dominated job sectors (Sánchez-Mira and O'Reilly, 2019).

Breadwinning women who are the main wage earner but have a male partner also employed are typically of a higher socio-economic status than women heading pure female-breadwinner couples. They also have the highest average labour incomes of women across all couple types. Even so, as individuals, women as main wage earners remain disadvantaged, as their labour incomes tend to be lower compared to those of men as main earners, again reflecting persistent gender penalties in employment and pay.

Female-breadwinner couples should be a priority for policymakers

The economic disadvantages faced by ‘pure’ female-breadwinner couples potentially exacerbates their higher rates of union dissolution, lower relationship quality and lower well-being compared to other couple types (Bertrand, Kamenica and Pan, 2015). Therefore, policymakers should pay particular attention to these families, especially in light of the current pandemic and the additional employment, financial and health strains on families and evidence of the 'fluidity’ of couples’ employment arrangements. If there is a widespread added worker effect, with women compensating for a male partner’s job loss by increasing their labour supply, then policymakers need to ensure families are not unduly financially penalised for transitioning to a female-breadwinner arrangement.

Redressing the economic disadvantages faced by female breadwinners compared with their male counterparts is also important for breaking down the male-breadwinning norms at the root of persistent gender inequalities.