Life Expectancy Is Increasing - But By How Much Exactly?

Smoking is undoubtedly one of the most important determinants of mortality levels and trends in European countries. However, its impact - different for men and women, across generations and countries - can hardly be captured by conventional mortality projection methods. The Dutch researchers Fanny Janssen, Leo van Wissen, and Anton Kunst now present a new methodology accounting for the smoking epidemic’s non-linear and complex nature.

In most European countries, smoking has been taken up differently by men and women and by different generations. Typically, the smoking epidemic shows a pattern of increase and then decrease in smoking prevalence, followed by a similar increase and decrease in smoking-related mortality three or four decades later. There are contrasting trends based on gender: For women, the increase in both smoking prevalence and smoking-related mortality started much later than for men and is more modest.

For instance, in the Netherlands, the share of mortality due to smoking among men has already declined since 1983, whereas the turnover from the current increase into a future decline has yet to occur among women (see figure 1). 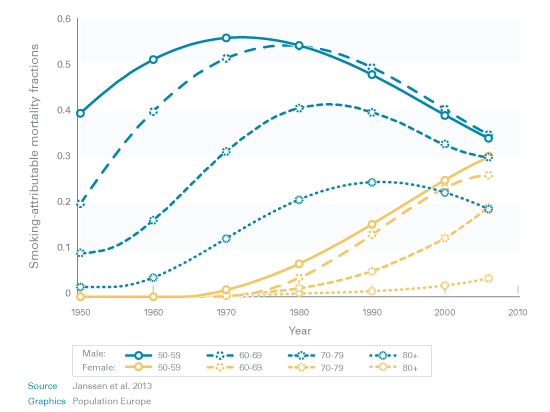 Figure 1: Smoking-attributable mortality fractions (=share of mortality due to smoking) by age and sex, The Netherlands, 1950-2006.

In order to achieve this, Janssen and colleagues developed a new mortality projection methodology which on the one hand uses epidemiological insights to take into account deviations from the linear past trend and on the other hand incorporates mortality trends of the opposite sex and other countries to create a broader empirical basis for the identification of the most likely future developments. Particularly by distinguishing between the non-linear smoking-related mortality and the more linear non-smoking-related mortality, more robust long-term projections can be provided.

For the Netherlands, their method results in substantially revised estimates of future trends in life expectancy as compared to most other projections (see table 1).

Table 1: Life expectancy at birth in 2040 according to Janssen et al. 2013 and various other forecasts for the Netherlands (NL), by sex.

When the smoking epidemic is included in coherent projections based on 22 male and female populations, the results indicate that life expectancy at birth in 2040 will increase to 85.0 years for Dutch men and 87.2 years for Dutch women. The separate projection of smoking- and non-smoking-related mortality produces, on the one hand, a steady increase in life expectancy for males, and, on the other hand, a non-linear trend for females, with lower gains in the short run. This in turn leads to a temporary convergence of trends between the genders; a result which is in contrast to a divergence shown in most other projections.

We are living longer and longer, but in 20 or 30 years, what will actually be the level of life expectancy? Robust projections of future trends of life expectancy are highly relevant for public policy, fiscal and health care system planning. As the example of the Netherlands clearly shows, particular attention should be given to the influence of smoking-related mortality as it is characterized by non-linearity and exhibits clear differences between the sexes and across countries.

This PopDigest is also available in French, Spanish and German.

This Population Digest has been published with financial support from the Progress Programme of the European Union in the framework of the project “Supporting a Partnership for Enhancing Europe’s Capacity to Tackle Demo­graphic and Societal Change”.