How Do Environmental Factors Influence Migration?

The impact of climate change on migration has gained both academic and public interest in recent years. Despite an increasing number of empirical studies, there is no scientific consensus as to what extent and under which conditions environmental factors influence migration. To fill this gap, I worked with my colleagues Anna Dimitrova, Raya Muttarak, Jesus Crespo Cuaresma and Jonas Peisker from the Wittgenstein Centre for Demography and Global Human Capital (IIASA, Austrian Academy of Sciences, University of Vienna) to conduct a meta-analysis on the relationship between environmental change and migration. This article is now available in Nature Climate Change. Based on 30 original studies, we show how environmental factors influence migration in different contexts.

In our meta-analysis we find robust evidence that environmental factors explain migration patterns. However, the size of the relationship strongly depends on the particular economic and sociopolitical contexts, as well as the environmental factors under consideration. The strongest environmental impacts on migration are found in studies with a large share of non-OECD countries, particularly from Latin America and the Caribbean and Sub-Saharan Africa (Sahel region and East Africa). Furthermore, we find stronger migration responses in studies focusing on middle-income and agriculturally dependent countries, and weaker responses in studies concentrating on low and high-income countries. This suggests an inverted U-shaped relationship between socio-economic development and migration. 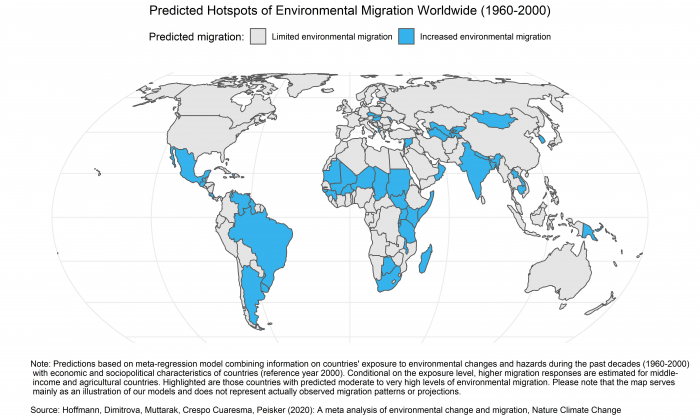 The commonly found narrative of climate refugees pushing towards Europe or the U.S. is in many ways too simplistic. Our findings suggest that environmental impacts result mainly in internal migration or migration to low- and middle-income countries, rather than cross-border migration to high-income countries. Taken together, the results of our meta-analysis mirror the findings in the empirical literature, which reports that environmental migration is often short-distance, regional, and temporary. Affected populations typically migrate to places within their own region and eventually return to their homes within a relatively short period of time.

Different types of hazards have differential impacts on livelihoods and can both amplify or suppress migration. Comparing a range of environmental drivers, our findings suggest that increasing temperatures and temperature extremes, followed by rapid-onset events (e.g. hurricanes or tsunamis) and precipitation anomalies (e.g. changes in rainfall variability and patterns) have the strongest impacts on migration. Importantly, the different environmental drivers are not independent, but closely connected and can reinforce each other in influencing migration.

Environmental conditions alone are rarely the only migration driver, but one of many that influence migration. They shape various macro, meso, and micro factors influencing the decision of households to move. Our meta-analysis provides additional support for the role income changes and conflict play in explaining environmental migration. Environmental change can disrupt livelihoods and lead to the onset and spread of conflicts in certain contexts, especially where governance is weak.

Given the expected rise of global average temperatures due to climate change, our results have important implications for global policy discussions, highlighting the role of contextual factors in influencing environmental migration. Environmental factors can be an important migration driver, but there is no automatism at play. While in some contexts, changing conditions lead to increased migration, they have no effect or constrain migration in other contexts. Policy interventions thus have to be tailored to the actual situations on the ground to effectively support affected populations.

A particular focus should be placed on those groups most vulnerable to environmental change. This includes migrants as well as people who decided to (voluntarily or involuntarily) stay in an affected region. While migration can be an effective adaptation strategy for households, it can be forced and come with non-negligible consequences for the migrants, their household members and their communities. People fleeing for their lives require special protection and support; and it is the responsibility of every country and the international community to ensure that this protection is granted.

This work would not have been possible without the generosity and contributions of the authors of the papers included in our meta-analysis who kindly shared their data and codes with us. We are very thankful for their support.