The Spread of Uncertainty Causes a Drop in Birth Rates

The widespread and prolonged decline of European birth rates during the last decade is a solid trend and the reasons for that are many. Among them, previous studies have suggested that individuals’ observations of the broader economic climate, including media coverage of the economy, might increase uncertainty and affect decisions to have children. However, these studies do not establish the link between media coverage and the individuals’ receptivity to the media’s message. How do we know that the particular media interpretation of an event is accepted and influences the behaviour of the general public?

In a recent article, Chiara Ludovica Comolli (University of Lausanne) and Daniele Vignoli (University of Florence) looked at this question. To measure uncertainty, they analysed Google search trends [1] for the term spread [2], which became a buzzword to discuss the Great Recession in Italy and a barometer of the crisis. The term concretely refers to the interest rate differential between the Italian (risky) and German (solid) long-term bond yields. Not only newspapers’ front pages constantly referred to the notion of spread, but television programmes interviewed politicians and citizens in the streets to ask about its definition. It became a crucial measure of how the wide public perceived economic uncertainty. The authors then analysed trends in the spread between the Italian and German bonds and in the Google searches for the term spread, in relation to national and regional monthly birth data provided by the Italian National Statistics Office (ISTAT).

The top panel in Figure 1 shows the trend in the spread between the Italian and German bonds between 2005–2018 (grey solid line) and Italian birth rates (black dash-dotted line). The spread began a slow increase at the end of 2008, but only truly escalated in mid-2011 peaking at the end of that year. The bottom panel shows Google searches for the term spread, which peaked in November 2011. Before that, searches for the term were approximately zero. The date of the maximum number of searches identifies when individuals internalized the media narrative of the crisis, when the Italian sovereign debt crisis was perceived to be most salient among the population and thus uncertainty peaked.

In a second step, the authors used this date, November 2011, to investigate the effects on birth rates around nine months later. Their results demonstrate that birth rates dropped by 0.05-0.20 nine months later in response to the uncertainty shock in November 2011. This represents a drop between 1.5% and 5% with respect to birth rates before the rise of uncertainty. In size, this decline is substantial: it similar to the association between unemployment rates and total fertility rates (-3%). Moreover, it is higher than the association between the decline in consumer confidence and total fertility rates (-1%) for both Europe and the U.S. (Comolli, 2017).

These findings represent a short-term impact after the shock, but it still remains to be seen if this postponement in childbearing will have a long-term or permanent effect. Unlike previous studies, the authors were able to show that the general public does respond to how the media frames uncertainty and thus, confirmed that there is a link between economic uncertainty and childbearing. 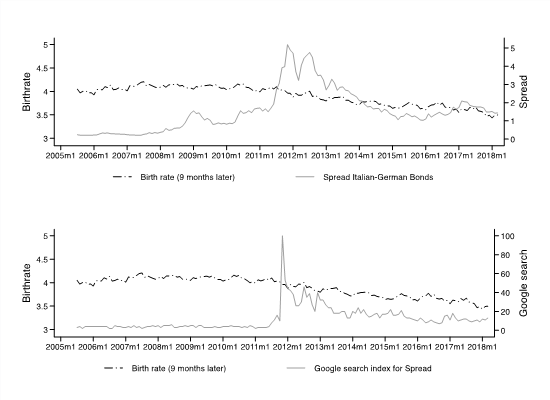 Source: Elaboration based on Eurostat, OECD and Google data (2020).

[1] The Google Trends (GT) tool was introduced by Google in the summer of 2008 to provide a public view into relative internet search volumes.

[2] The term ‘spread’ is typically not translated by Italian media.