The Longevity Revolution is Going Strong

The human longevity revolution that started in 1840 shows no signs of ending soon, according to a Perspectives article published in PNAS. Understanding how much human lifespan can be extended is a major scientific goal, with critical implications across health, social, political, cultural, and economic domains. James Vaupel, Francisco Villavicencio and Marie-Pier Bergeron-Boucher summarize past trends in human longevity, upcoming prospects for life expectancy, and potential directions for future research.

Until recently, longevity experts have assumed that human lifespan is limited, in part because of the lack of strong evolutionary pressure against deleterious genetic variants at older ages. But historical demographic data seem to indicate otherwise. Since 1840, life expectancy has increased on average by nearly 2.5 years every decade among the top-performing countries, from 46 years to 87 years. The rise in life expectancy has been accompanied by an increase in lifespan equality across countries, primarily due to the prevention of early-life deaths. Life expectancy has been increasing for more than a century in the vast majority of countries worldwide. Many countries now have life expectancies that exceed 80 years. The rise in life expectancy before the 1950s was primarily due to progress against infectious diseases and the resulting decrease in mortality among infants, children, and young adults. By contrast, improved life expectancy since then has been mainly attributable to progress against chronic diseases, resulting in reduced mortality at older ages. In recent decades, the maximum lifespan has increased on average by approximately 1.5 months per year. The current lifespan record, set in 1997, is 122 years. The balance of evidence suggests that this record will likely be broken in the future.

If progress continues, most children born this millennium in countries with high life expectancy will become centenarians. But for now, it remains unclear whether good health is being extended to older ages. Moreover, longevity forecasts are highly variable, reflecting great uncertainty regarding the diverse behavioral, epidemiological, biological, economic, political, social, and cultural factors that influence lifespan. According to the authors, more research is needed to improve the accuracy of longevity forecasts in the future. 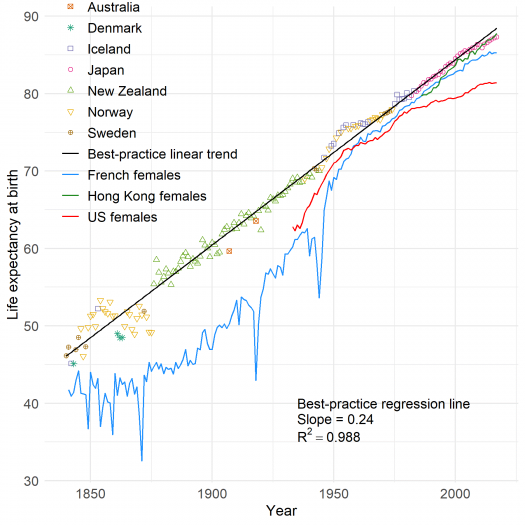